Giselle Rakobowchuk, Peter Rakobowchuk a.k.a Peter Ray, The Canadian Press reporter's daughter during her last year as university student, giving a presentation at a conference at University of Pecs in Hungary


Giselle Rakobowchuk, Peter Rakobowchuk a.k.a Peter Ray, The Canadian Press reporter's daughter during her last year as university student, giving a presentation at a conference at University of Pecs in Hungary


Giselle Rakobowchuk, Last Year Student, Daughter of Peter Rakobowchuk Giving a Presentation at a Conference at University of Pecs in Hungary

Giselle Rakobowchuk, daughter of Canadian Press reporter Peter Rakobowchuk from his first marriage with Agota Szabo. Although she was born and grew up in Canada she finished her BA Sociology at the University of Pécs with excellent marks.

Here, below some photos taken during her last year at university. She was honored to have been asked to give a presentation at a conference.

Giselle Rakobowchuk with some of the professors 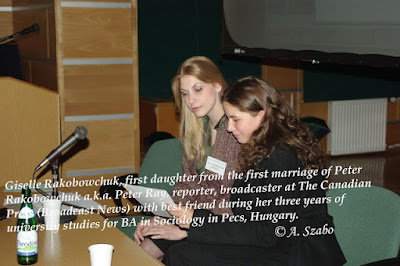 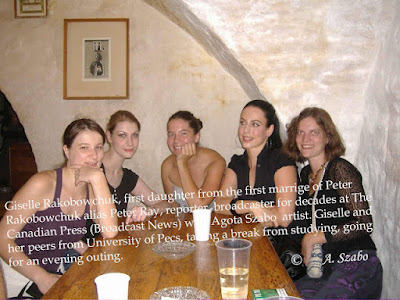 Giselle with friends and peers from uni

Email ThisBlogThis!Share to TwitterShare to FacebookShare to Pinterest
Home

Agota (Agatha) Szabo
Canadian-Hungarian artist.In her twenties immigrated to Canada, lived there about twenty-five years. As modelling director of Jerry Lodge Talent Agency, (owner Marie Morton, then personal manager of Michael J. Fox) met Peter Ray a.k.a. Peter Rakobowchuk, CKO Vancouver news director. He was fired for a racial incident, but his lies and begging got Agota to give up her great career and move with him to Toronto. He got a job at Broadcast News/The Canadian Press. Faced with a choice she chose marriage and a baby and started painting. Few years later, her husband enticed her into an extended stay at her parents’ in Hungary, so he could take a journalist course in Paris. Lying to his family in Canada he didn’t know where they were, left his legal Canadian wife and first child there without any money and began a double life with now-wife Patricia, Pat Enborg. Our daughter Giselle, now living, working in Canada started the original blog about my life, art and her writing when a few years ago we found on the net their defamation of us to discredit us, to keep their lies, his fraudulent election campaign, his first legal marriage and child, the racist comments he had made on the air secret.

COPYRIGHTS All text, images, graphics and other materials on this website are subject to the copyright and other intellectual property rights of Agota Szabo and Giselle Rakobowchuk and no one else. No rigths given to any respective owners. These materials may not be reproduced, distributed, modified or reposted to other websites without the express written permission of Agota Szabo. All rights reserved. In order to contact her representative and the blogger of this site please send an e-mail to: a.szabo.artist@gmail.com.